The Mogosoaia Palace is a great destination if you stay in Bucharest, either for a relaxing time in its beautiful park or for a cultural objective, to learn more about a part of the Romanian history.

Luckily, I attended the Museum Night in May and Mogosoaia Palace was our choice, for me and Oana.

Mogosoaia is situated north-north-west of Bucharest, approximately 15 minutes from the center by car. Unfortunately, you cannot go by subway, otherwise you can be sure that I would go more often. The best is good old masina (car).

Entering through the official entrance of the park, you will follow a long path through the trees, across a large ground of green grass. Gradually, large buildings appear, and before reaching the viewpoint of the entrance, you face the church of St. George. 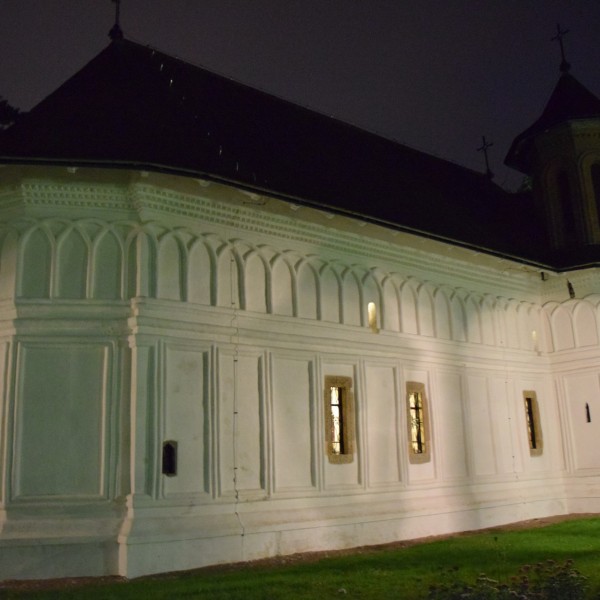 Imagine the splendour. Despite the darkness of night, the whiteness of this holy place wins and it’s not hard to spot it. In addition, a song, growing its sound as I advance, reaches me and make me fall into a passive meditation and a good mood.

These are the priests chanting the evening Mass.

Erected in 1688 by Constantin Brancoveanu (Prince of Wallachia), the church has the shape of a boat, with a turret on its left flank. Its roof, shaped like a flattened triangle, gives it a charm, especially since there are wooden tiles. A beautiful work of art.

The porch is half closed by 8 columns and between them, flowerpots are suspended. We find religious frescoes and enter a little … 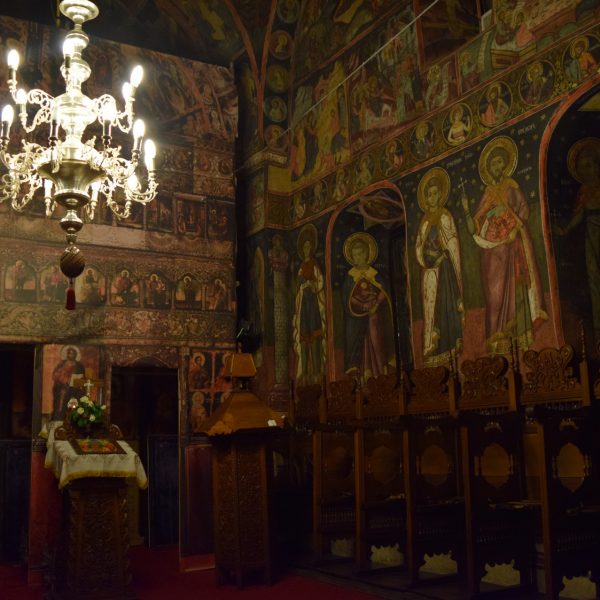 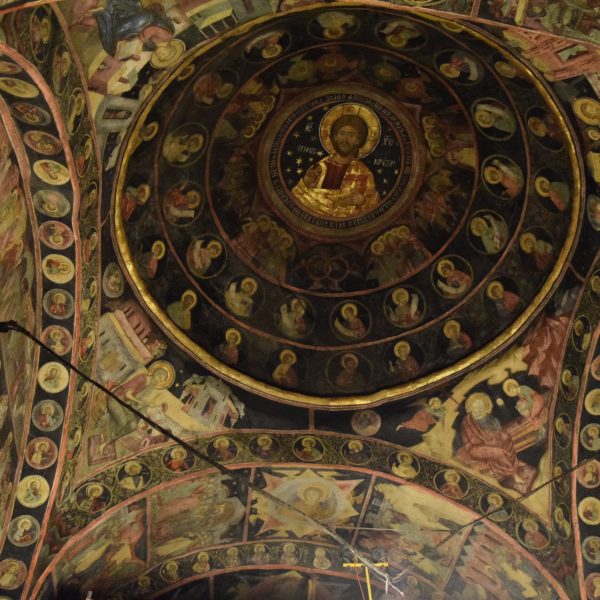 … Because inside, mural paintings are everywhere. Bright and gold colors, you find yourself in the presence of a typical cultural beauty of Romania. We find saints and religious scenes. Above you, in the dome, Jesus stands among the stars, having the fingers linked in sign of blessing. These decorations date from 1705.

Out of the church, you have only a few steps to go reach the entrance to the inner courtyard, called the Tower of the door. It was built in 1702 and restored in 1980. It consists of orange bricks and covered by a wooden roof supported by slender columns. From this tower, a wall of 3 meters high covers a large area close to the palace. 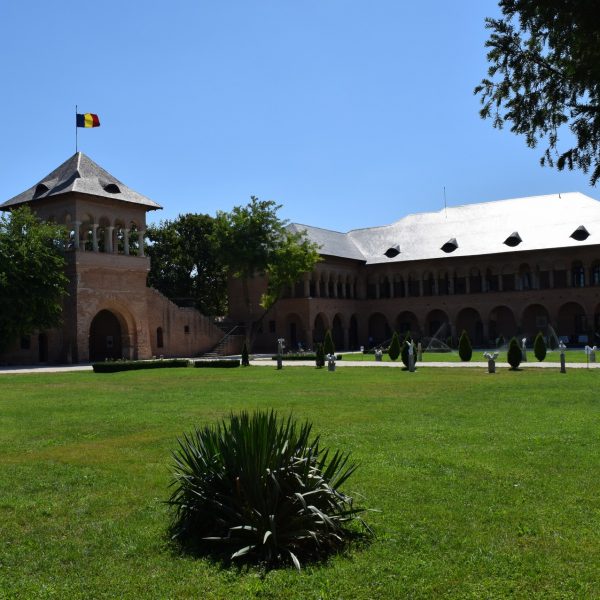 Directly to your right is Cuhnia, kitchens of Voivode Constantin Brancoveanu. They are representative of its architectural style. 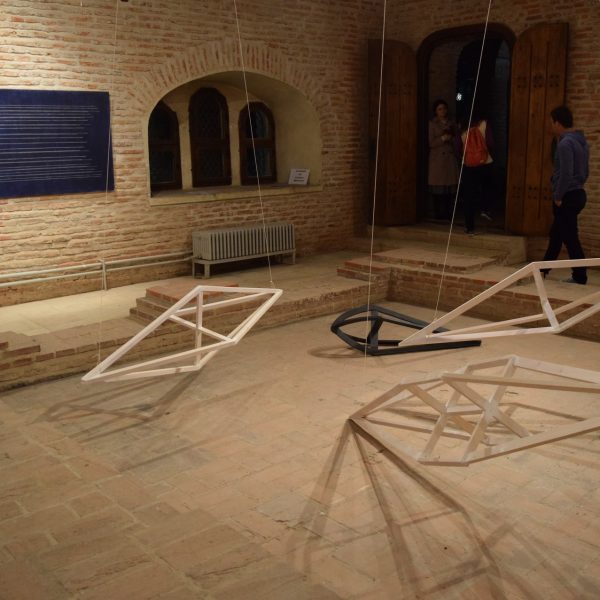 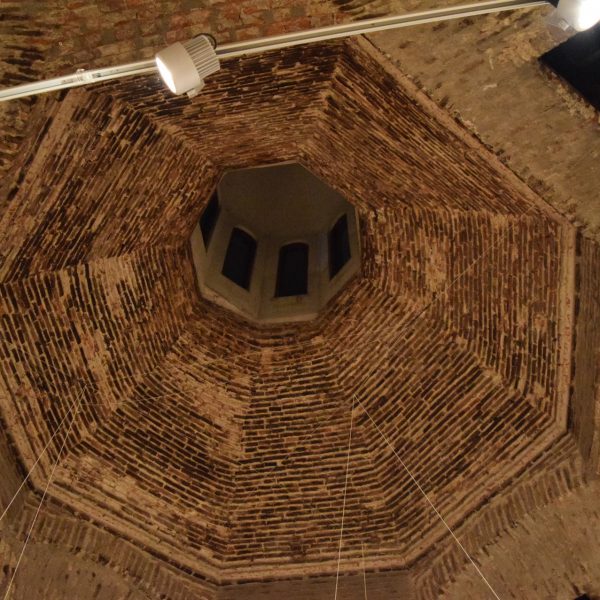 Built between 1681 and 1702, they have the specificity to have four ventilation towers. Today we find there works of modern art, and in the empty rooms, we cannot really imagine what it was like in the past.

Outside the kitchens, a joyous melody boosts my hearing. This comes from a wooden flute that someone in the middle of the yard is playing with talent.

Tonight, the buildings are illuminated heavily and fortunately so, because due to the darkness of the night, we could not have enjoyed the beautiful sight.

Let us see the two buildings that are available to us:

The first was built in 1870 by Nicolae G. Bibescu and is called the guest house. Today the building is used for catering and accommodation and you can sit there in the summer, under the porch, to enjoy a drink in the shade. 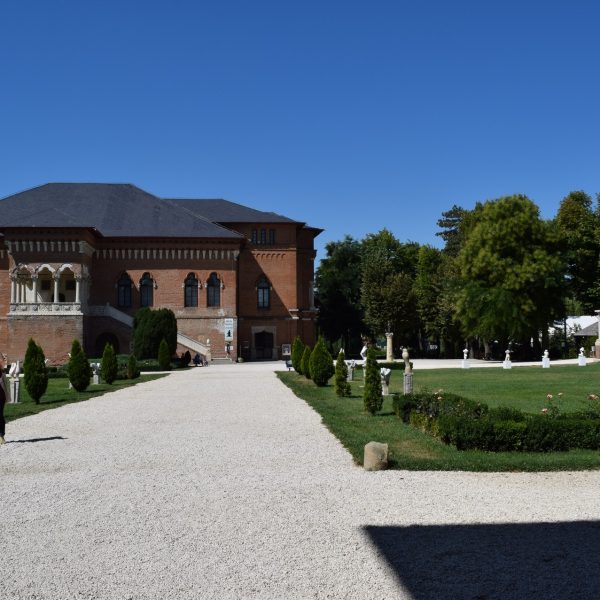 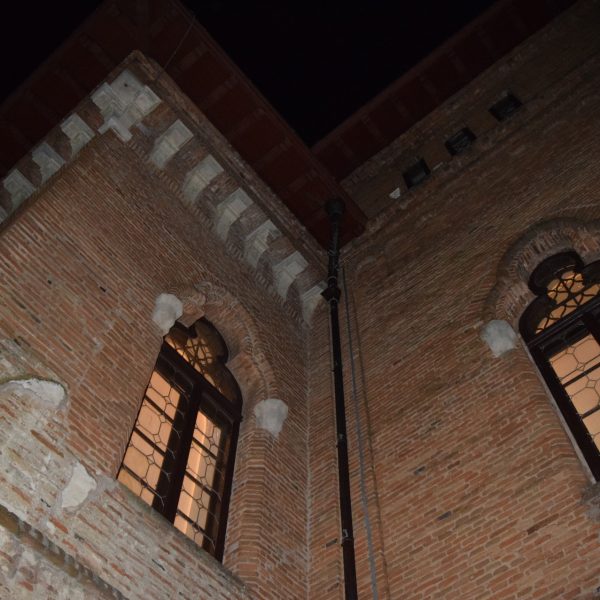 The second, the one that interests us most is the palace of Mogosoaia.

Before describing it, a little history is needed:

Constantin Brancoveanu, prince of Wallachia from 1688 to 1714, has achieved a lot in his lifetime.

First, he built the monastery of Horezu in the beginning of his reign, in 1690. Then he built the palaces of Potlogi and Mogosoaia Palace, built in 1702. The architectural style of these historical monuments will be later deemed as authentic, and it was called the “brancovenesc” style.

On the other hand, Constantin Brancoveanu attempted to find an agreement between the neighboring powers to enable Wallachia to obtain its independence. He will be allied at the same time with the Ottoman, Austrian and Russian, despite that they were enemies. You understand that this is difficult … So in 1695, the prince being a vassal of the Ottoman Empire, will receive the title of Prince of the Holy Roman Empire, and in 1700 he was decorated with Cross of St. Andrew by the Tsar of Russia.

Everything seemed to continue as usual, but jealousy came to join in the party because Brancoveanu was a very wealthy man. His uncle, Constantin Cantacuzino, decided to denounce him to the Ottoman Empire. The prince was arrested and sent to Constantinople with his sons, where they will have to make a choice, to convert to Islam or die. They refuse and even the prince says to his youngest son “You lived as a Christian, and it is a Christian that you will die.” He and his family will be beheaded.

On 15 August 1992, the Prince Constantine is canonized by the Romanian Orthodox Church and this holly day is 16th August.

In this story, Mogosoaia Palace was one of the residences of Prince Constantin Brancoveanu. He remained in possession of the family for 119 years. Unfortunately, its current form is restored, because the palace was devastated repeatedly. The first time during the Russo-Turkish war of 1768-1774, the second time during the revolution in 1821 when Gregory Brancoveanu, the last descendant of the family was forced to flee the palace.

In 1932, at the death of Gregory, his adopted daughter inherits the palace, which later became the property of the family Bibescu by marriage.

Much later, the palace will suffer damage from German bombing in 1912 and Martha Bibescu, owner at that time, will make renovations from 1920 to 1935. Then it will be nationalized by the communists. Plundered, devastated, it was after many years in 1957, that it became a museum.

We can be proud to find it in beautiful pageantry today after so many vicissitudes. 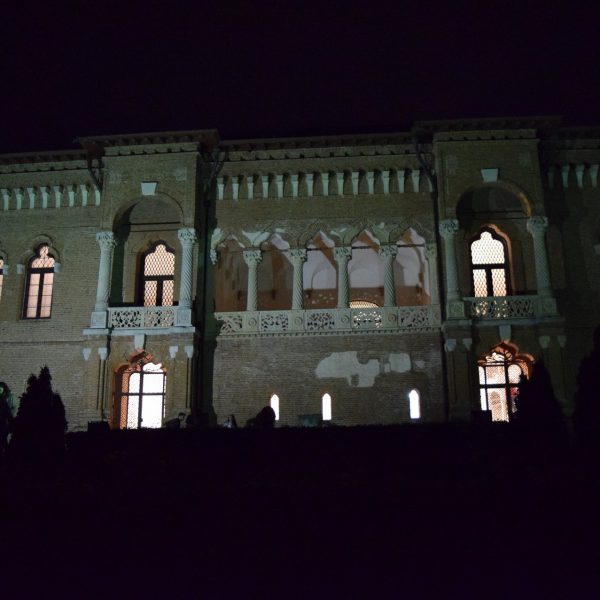 With an impressive hovel, the palace faces the lake of the park. Composed primarily of orange bricks, we find these particular and charming columns at the balconies, one facing the lake, the other to court. 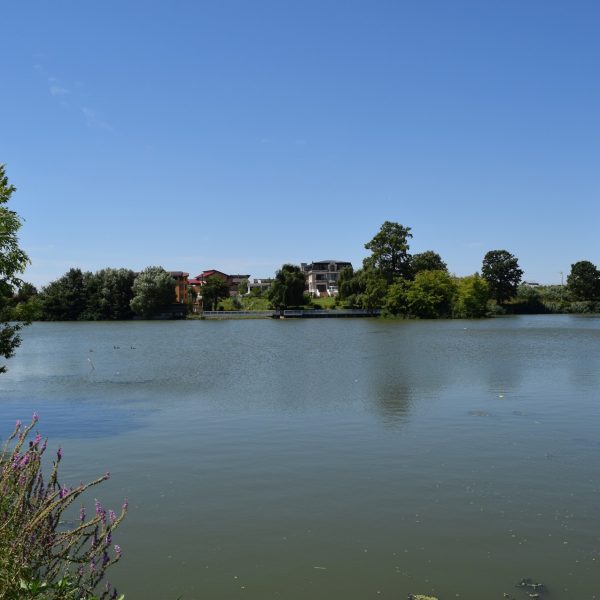 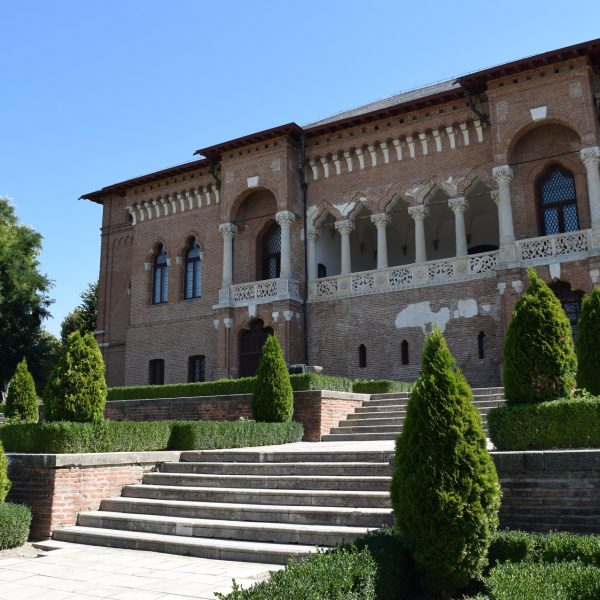 Inside, one can see very interesting objects preserved here as related to the history of Constantin Brancoveanu.

The rooms have retained their size and position, but outside of that, nothing is the same at the time of the Prince. The walls are covered in white plaster and furniture in it that are not original. Oh no, I forgot this frieze, which shows what the walls looked like in the early 18th century. 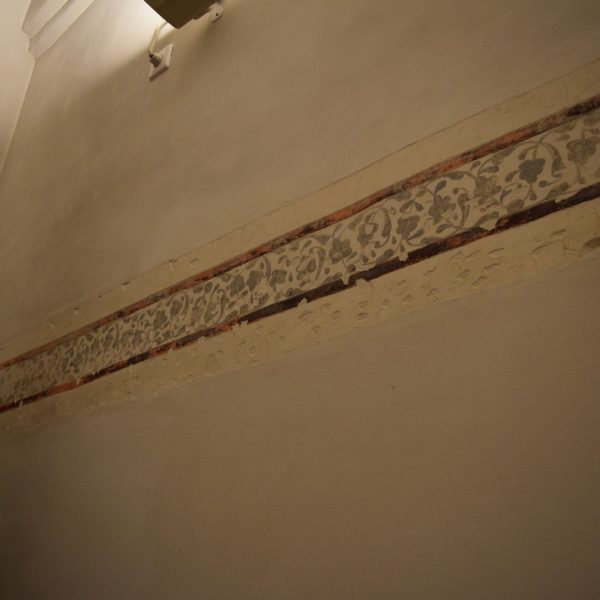 Include belts from the eighteenth century and religious icons painted on wood. 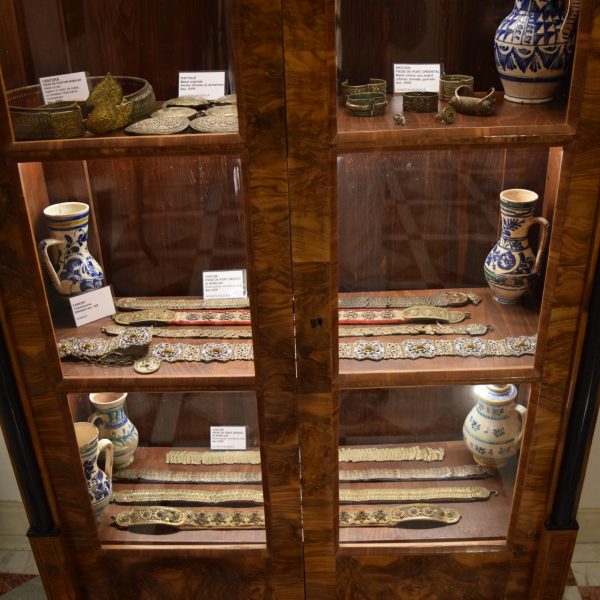 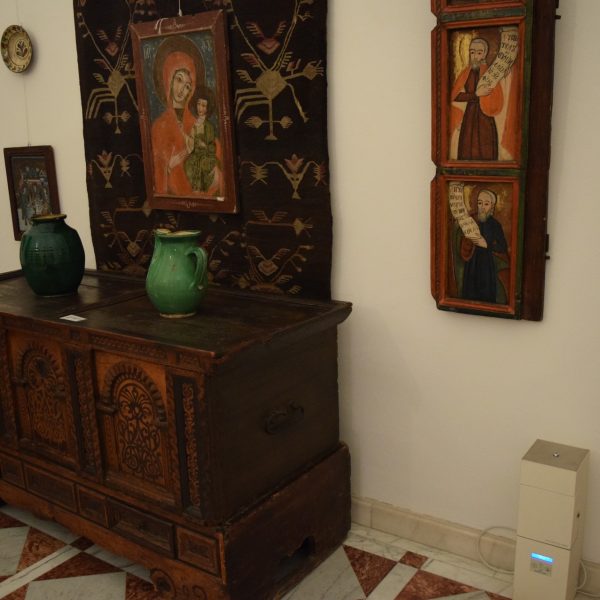 Here, a book dating from 1718, telling the story of the modern revolution in Wallachia. Constantin Brancoveanu and his son are on the cover page. 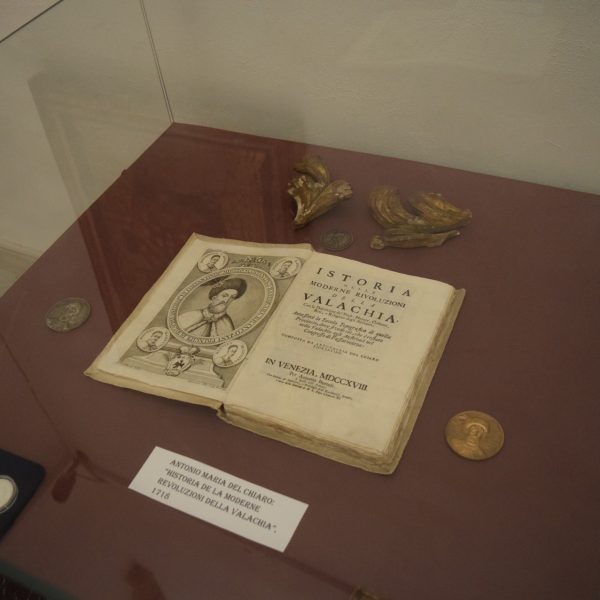 In another room stands the throne room. In reality, the guide told me that all the seats are from a church. 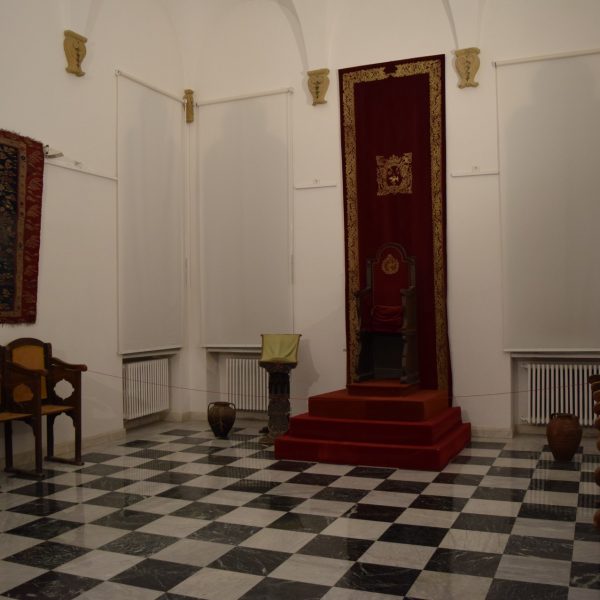 Without going deeper to the other details that I keep to myself, you can have the idea that visiting the palace is a rewarding experience from the perspective of history, because it offers clarity in a cloudy part of the history of the country less represented in other museums. 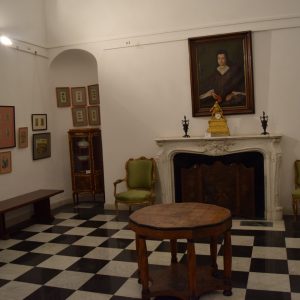 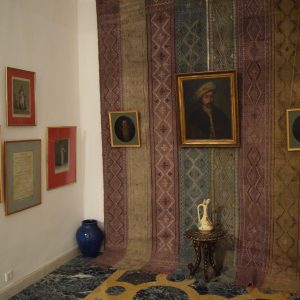 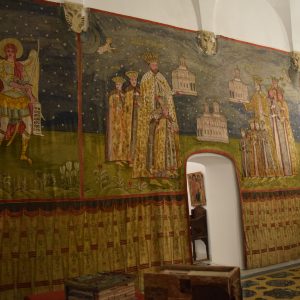 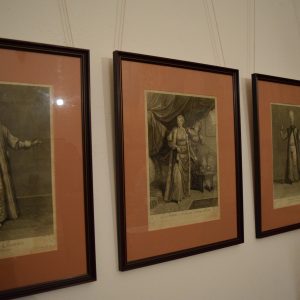 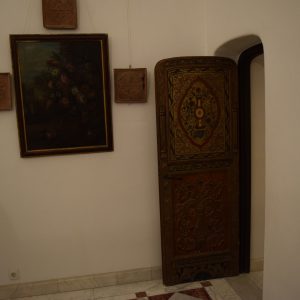 If not for its historical and cultural side, I recommend you at least go to Mogosoaia Palace for its extensive and beautiful park. Well maintained green grass took place across the old trees and it is the opportunity to nap, rocked by the songs of birds. For the more active, these open spaces are ideal for badminton, a walk, use your imagination!