Bran Castle is the most tourist monument in Romania.

Situated in the Judet of Brasov, it attracts a lot of foreigners, who want to see with their own eyes the castle of “Dracula”, the vampire from Bram Stoker’s novel.

But behind these false beliefs, behind this marketing that works so well, finally, behind the high walls and the dark turrets, lies a beautiful monument full of history.

The Bran Castle story begins in 1211. The king of Hungary, Andrew II, wants to protect his region from Coumans and Pechenegs (Turkish nomads) who threaten to move westward. For that, he will offer the Teutonic Knights, a Catholic Order born in Palestine by Germanic crusades, the country of Barsa. They will build there a fortress named Bran ( “door” in Turkish),  all made of wood. Unfortunately, they will benefit very little of this building, because they were expelled from the region in 1226 by Hungary.

Long after, in 1377, the Saxons of Brasov, Transylvania arrived in the 12th century to colonize and defend it, will obtain the right to build a real castle, from the current Hungarian King Louis I of Anjou.

The work will finalize in 1388. Placed on the slope of a hill, the fortress was strategically set up to identify passages in the valley. Being an important place for the transfer of goods, the fort has seen many soldiers, mercenaries and other people passing by.The noble in charge of the castle was elected by the Hungarian king, usually among the Saxons, and its role extended across Transylvania.

In 1407 it changes ruler-ship, given as a reward for the loyalty of Mircea the Old to the king of Hungary, Sigismund of Luxembourg. Being the voivode of Wallachia, it is one of the first agreements between the two principalities. Castle returns to its owner in 1419 after Mircea’s death.

In 1441, Iancu de Hunedoara defeated the Turkish in Bran. It becomes very important to preserve this strategic point and the Saxons from Brasov are called for support.

In  1459 Vlad Tepes, named “Dracula”,  comes in Bran, being actually the Voivode of Wallachia at that time. There he kills 100 Saxons for a conflict of interest and will acquire a bad reputation.

The castle suffered extensive damage throughout his life. The powder reserve will wick in 1593, a storm will ravage the roof in 1617. Fortunately, it was under the reign of Gabriel Bethlen (1613-1629) it will be rebuilt and refurbished

In 1919, after WW1, Ferdinand I includes Transylvania, Wallachia and Moldavia in the same country, Romania.

His wife, Queen Marie of Romania, will be offered the Bran Castle by the people. It pleases her a lot and she will do restorations and improvements to make it more  “royal”. It becomes her summer residence.

Queen Mary died in 1938 and her daughter, Princess Ileana, will inherit the Bran Castle. During World War II, she built a hospital and healed the war wounded until 1948. Unfortunately, she had to flee the country upon the arrival of the Communist regime. In 1956, the castle became a museum containing the royal heritage, the medieval heritage and an ethnographic museum.

The latest renovations have been completed from 1987 to 1993   and in 2006 the castle rightfully belongs to the 3 heirs of Princess Ileana.

Reading at the moment the novel Dracula, I understand, at the same time that I write, that counts and legends on the castle of the vampire are false. The history is nevertheless very beautiful and full of truth. But let me tell you mine, that of two French discovering for the first time this wonder of Romania. 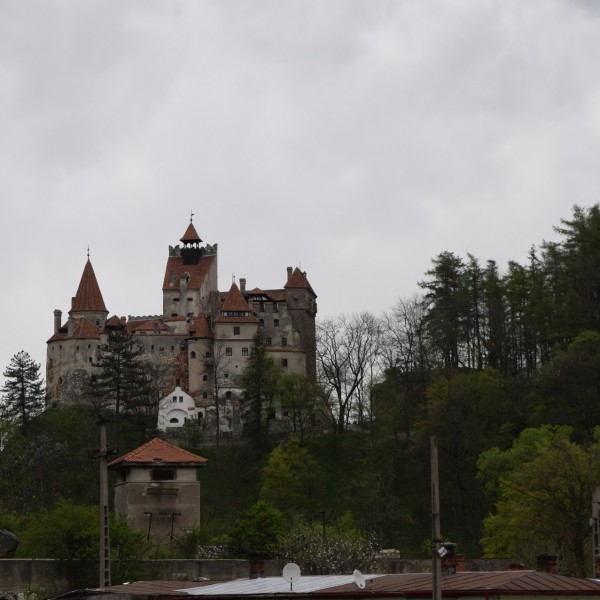 The Bran castle, a strong, dark building, stands on a large rock and you have to climb a lot of stairs to reach it. Due to its height, we pass the threshold of the trees, forests that surround it, at its base. As a silent guard, a stone star that must weigh heavily awaits. She has nothing to say, if not strange symbols written above, perhaps a curse, which will make turn back the fearful ones. 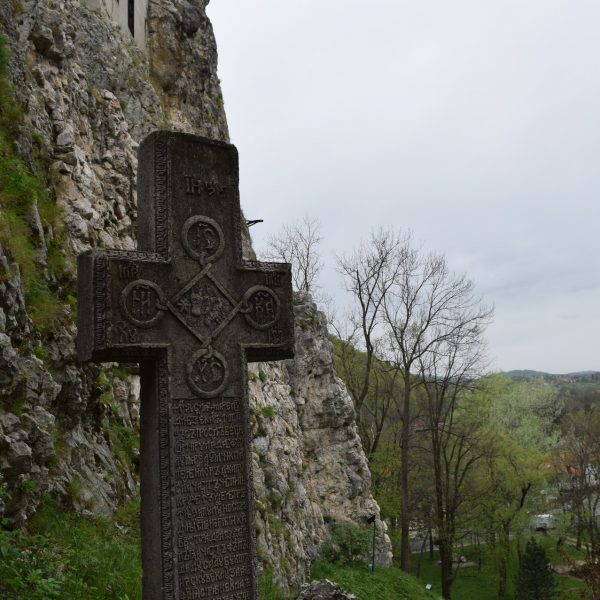 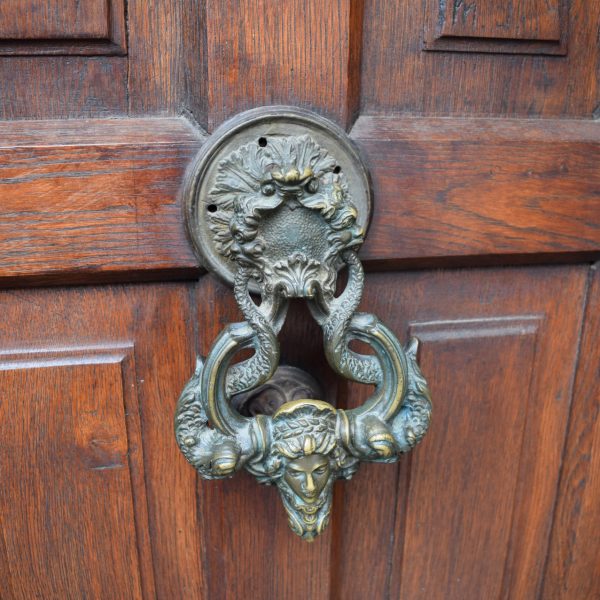 After crossing a heavy wooden door, you come in the middle of the castle, in the courtyard. In a nice way, it is from here that the different parts of the building are connected. Paved with large uniform stones, austere atmosphere reigns here. Some trees are present, but it is as if they wanted to hide because they emit nothing, no noise, no smell, no life. We find an old well in the middle of the yard, where, carved on stone, a lion fiercely guards a helmet. “Do not drink water especially here” an old man tells me, before disappearing into a dark hallway as quickly as he had appeared. 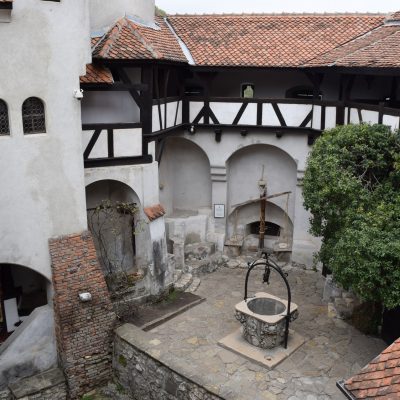 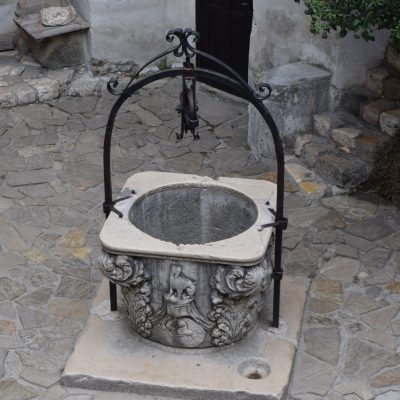 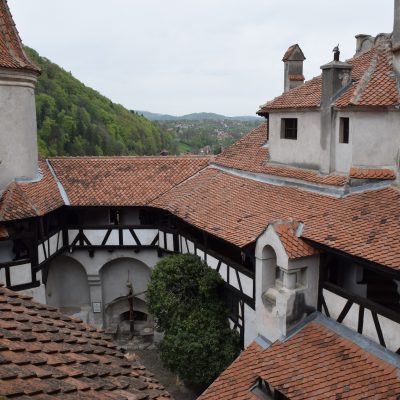 All this starts to become very strange, and coming back to reality, Mom and I are starting the tour. The first room that we enter is, I am not sure why, filled with old children’s toys. Although this piece seems to have no connection with history, it nevertheless remains interesting to see these old toys, which must probably date from the 20th century. Beyond children’s toys, furniture began to appear as well. Of different ages, from different sources, because many nationalities have been here, in many times, the style of the castle is indefinable, and my mother does not know where to turn to see more. 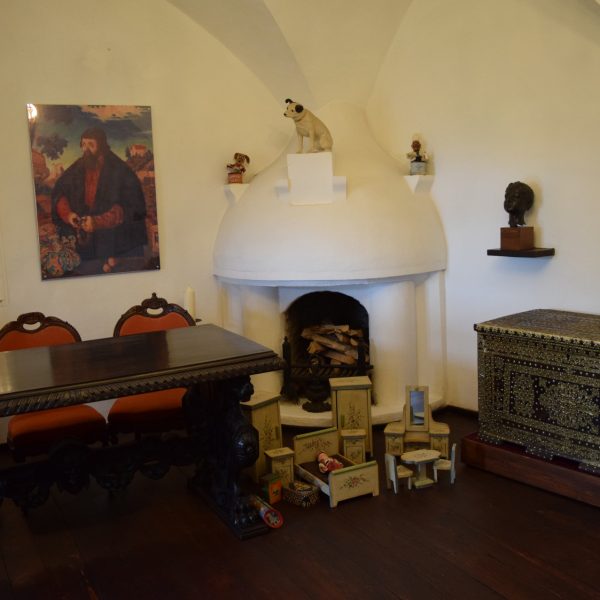 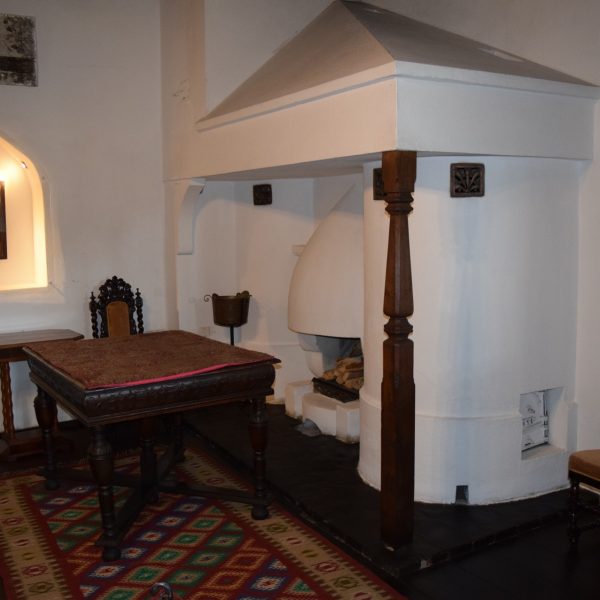 We find dark wooden desks covered with red table cloths, we see portraits of important people, so realistic you might expect to see the character go out.  Large traditional carpets, a piano in the corner over there, where the legend says, during the night, some strange notes come out .. Everything is authentic.

The rooms vary in size and some of them are very large. The white plaster walls offer the desired brightness to navigate, because without them, the shadows projected by the wooden ceilings, the little light coming through the windows, all these would quickly plunge you into darkness. Inlaid into the wall, fireplaces of  incongruous shapes were making very happy the occupants of the place, which had to face harsh winters alone in the vast castle. 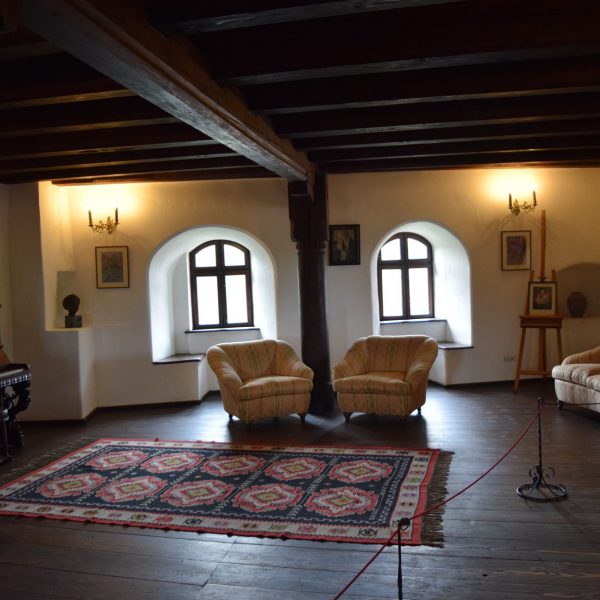 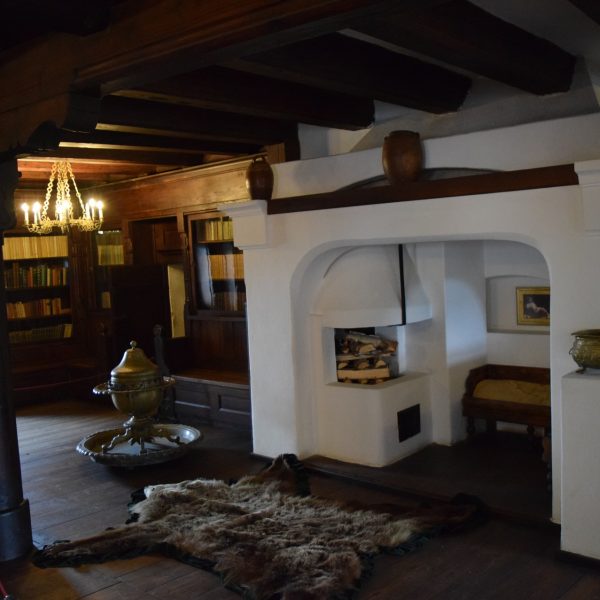 Here is a nice room where, one imagines, the voivode had found his favorite books in the library, and with bare feet on the bearskin, next to the fireplace, he enjoyed a good novel.

Taking the secret staircase from Bran Castle, a passage through steep and narrow wall, we climbed up to the highest visitable part of the castle. So we had a nice view of the mountains. From there, the parts of the monument are more recent, we see the ceramic stoves, more beautiful than I could see from my travels. Enjoy the dark office with arm rests ending with carved rams’ heads. Without wanting to tell lies, it would be the office of a nephew of the royal family. 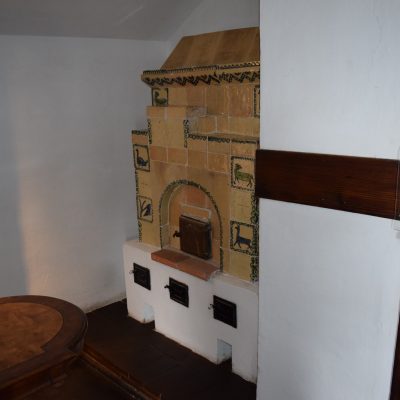 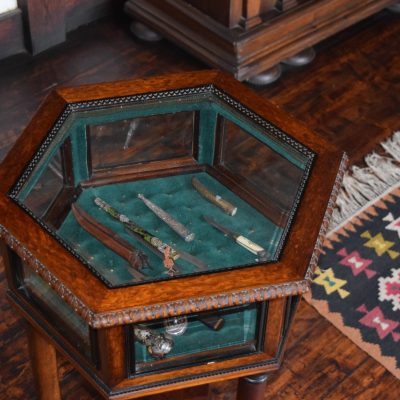 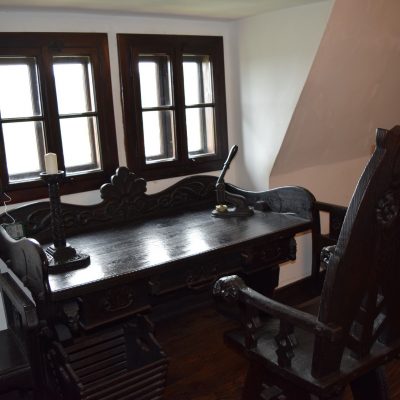 I do not describe you all the rooms, I do not have any description and it would be far too heavy in the text. Just be aware that there are many things to see and the visit certainly can last more than 2 hours. See some pictures that will bring more explanation than my own words. 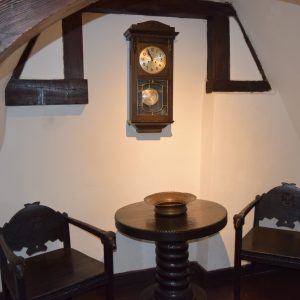 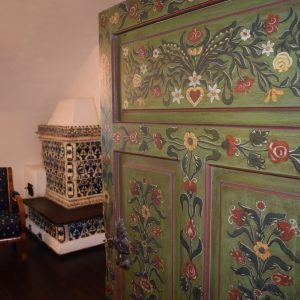 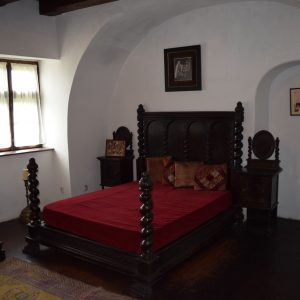 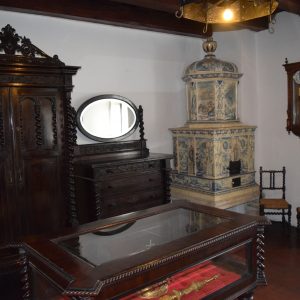 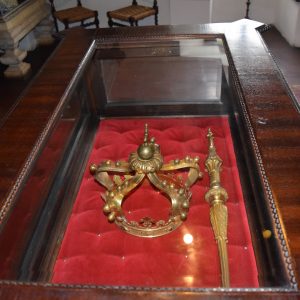 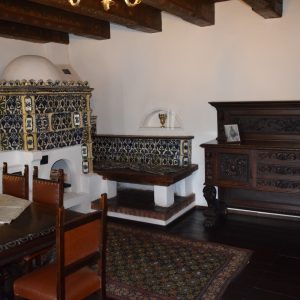 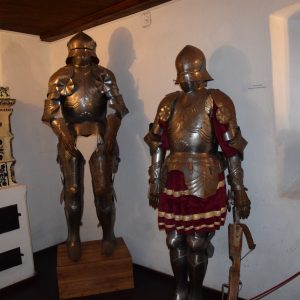 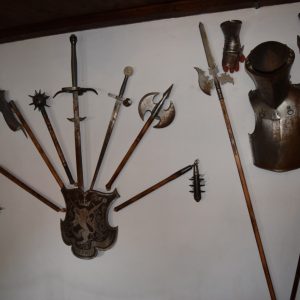 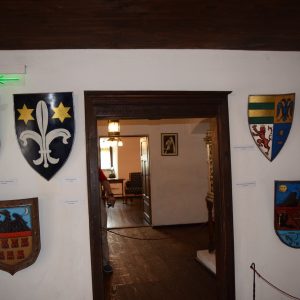 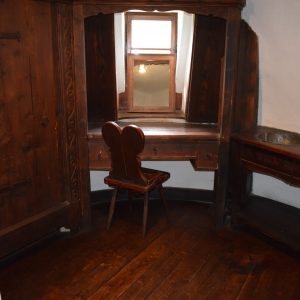 My mother really liked the castle, first of all because she was able to discover a large part of Transylvania’s history through my remarks, my own knowledge, but also thanks to many elements, historical and traditional, which dot the Bran Castle. When you enter a castle in Romania, the atmosphere is really special. It has that feeling of grandeur that any good castle offers us, but the colors, sizes, styles, all this takes us to another world, the world of dreams. 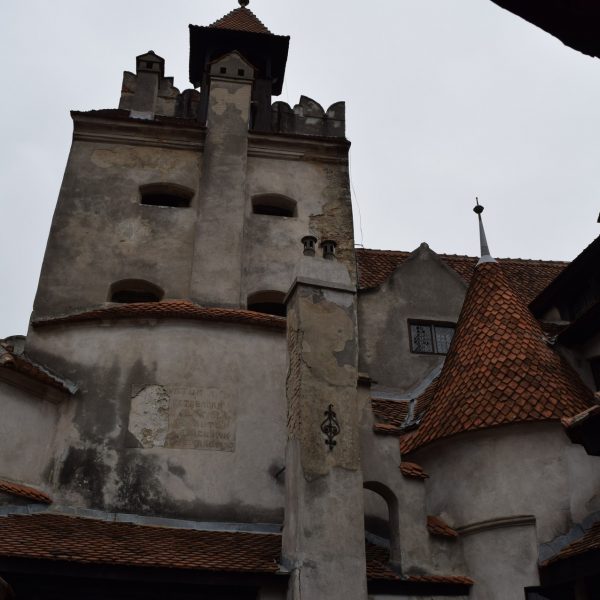 I invite you to come and discover the Bran castle, but if you want to appreciate the real beauty, perhaps it would be better to free yourself from all the false stories circulating about Dracula, and thus, it’s your imagination that can write the novel of your trip.